Gathering information about Jewish Oslo, I stumbled upon the fact about the Hurum airplane crash in 1949. Hurum is approximately an hour away from Oslo, and that’s why it was between the last spots in my list of interest places for thorough studies. However, when I learned more about it, I was surprised by the amount of amazing facts that are hidden in the history of this place.

After the foundation of Israel in 1948, Jews from all corners of the world flew there.The Special Children Invigoration and Preparation Program was created. Its aim was to facilitate the North African Jews (Morocco and Tunis) to move back to the historic motherland. Norway helped by hindering for the Jews’ use the former Hirden SS preparation camp (military formation of the Norwegian Nazi Party – Nasjonal Samling) located a couple of hours away from Oslo, where teaching and facilitating staff, consisting of Norwegians, Moroccans and Tunisians, were hired. The first group of children aged between 5-14 were hosted in the beginning of 1949. In general, over 400 people participated in this program, each group staying in Norway for up to 8 months. Many would wonder why exactly Norway, located so far away from the route between North Africa and Israel, became a partner of this project. 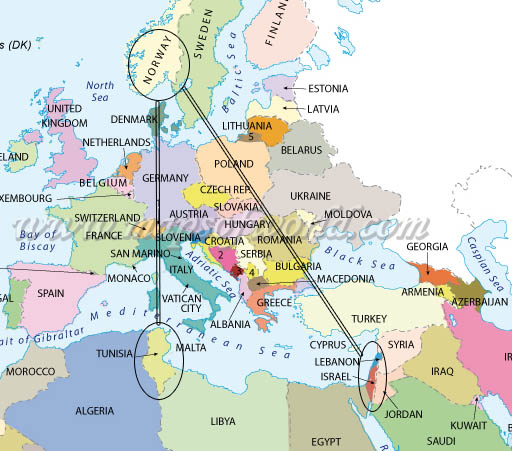 The Norwegian “Europahjelpen” was amongst the refugee supporting organisations in post-military years, and “Aliat Hanoar”, involved in Jewish teenagers’ immigration, appealed for its support. Since no appropriate place in the countries close to the travel route was found, there was a suggestion to send the Jewish kids to the Norwegian camp. An interesting fact is that the Europahjelpen was headed by Matilda Oftedal Broch, whose brother occupied one of the leading posts in the Norwegian Nazi Party.

But let’s get back to our story. Two DC-3 aircrafts of the now forgotten “Aero-Holland” started their journey from Tunis to Norway on the 20th of November, 1949.

The airplane carried 58 kids and social workers onboard. One of the planes had to stop in Brussels for radio facilities repairing. Unfortunately this stop turned out to be fatal. The weather at the point of destination (Oslo, Norway) was bad, thus the connection with the airplane was lost during its approach to the airport. Some assumed that the crew decided to land somewhere else in order to wait until the weather stabilised, however, the expectations were vain, and the active search for the airplane started. A presumable landing place was determined relatively fast: somewhere between Hurum, where the sound of the low flying plane was heard, and the destined airport – Fornebu, near Oslo.

Isaac immediately became known all around Norway, and, according to his wife’s words (from an interview dated from 2009), even HM Norwegian King Håkon VII suggested to adopt him. Even though such an unusual offer was denied, HM King Håkon VII did not forget about the boy and presented him a bicycle for his Bar Mitzvah (Jewish religious ritual commemorating a boy’s 13th birthday).

Euphoria after the miraculous redemption of Isaac was shaded the mourning after the passed passengers and crew members, This disaster was a shock for the whole country, and, due to the number of victims, was amongst the most distractive ones at the time. The ruling Labor Party collected donations, which were used for building the village “Norway” for Tunisian immigrants in Israel.

Why did the airplane crash? It’s true that the weather was nasty and the pilots could hardly see, however, another reason caused the disaster. Approaching the airport, the crew reported: “contact 1000 feet”. That meant that the airplane flew on a height of 300 m and had visual contact with land. It was very dangerous in a low cloud cover hilly area. Unfortunately, the traffic controller was inexperienced and didn’t pay attention to it. Afterwards, the investigation commission was unsatisfied with the traffic controller’s work, however, the members of the crew, piloting the airplane too low, were mostly to blame. Apart from that, the height o the hills were shown to be 164 m in the English map used during the flight, whereas the real height was 361 m!

The airplane crashed 65 years ago, but this event is not forgotten. Next to the monument on the fjord bank, close to the place of the crash, memorable events take place annually. Another monument was erected exactly at the place of the crash on Isaac’s request. He visited Norway in 1971 and met his saviors. Even thought the village, founded by Norwegians is called “Yanuv”, several original houses in honor of those days remained. There is also a street in Tel-Aviv named “Oslo Children”, in honour of the deceased kids. It looks like the story came to an end, however, there is still not a final dot in it. Due to the hostile attitude of the Arab countries to Israel, the Jewish immigration from Tunis wasn’t completely legal. As a result, just after the air crash, the Tunisian government who didn’t want to be seen as an Israel ally to Arab countries, claimed to bring their passed away citizens back to bury them.

From time to time, the families of the deceased kids asked for their reinternment in Israel. On one hand there are only a few Jews left in Tunis, and the graves will be left unattended. On the other hand, which is more important, the kids were heading to Israel and their wish should come true, even if posthumously. But as usual, the last word remains with the politicians, and they don’t seem to be in a rush to solve this issue.