Present Through the Lens of the Past

“What the Photograph reproduces to infinity has occurred only once: the Photograph mechanically repeats what could never be repeated existentially.” Roland Barthes

What if we merge a photo with the same place where it was once photographed? In this case, we can argue with the great philosopher Roland Barthes about the possibility of repeating once again the moment that was photographed a long time ago. Simply put, the time machine effect turns out by merging photos on a new photograph: a window into the past. And no matter how many years have passed between “then and now,” – the temporary perspective shrinks to impossibility.

In order to emphasize the time difference even more, one of the most controversial Oslo history periods was chosen for this project – the years of German occupation 1940-45. Just think: over 70 years have passed, and we still walk on the same stones where German tanks used to drive on, and where soldiers-invaders used to march. Such a seemingly distant history turns out to be not so distant at all.

Private photos taken by German soldiers in Oslo were used in this project. 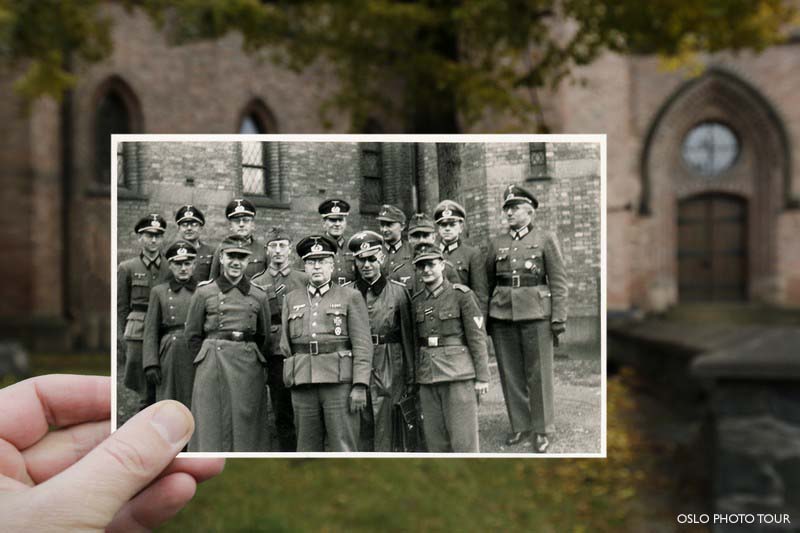 Numerous German amateur photographers who became soldiers did not leave their hobby and continued to photograph the daily life. Thanks to them, we have an idea of what the unofficial side of the war was like. 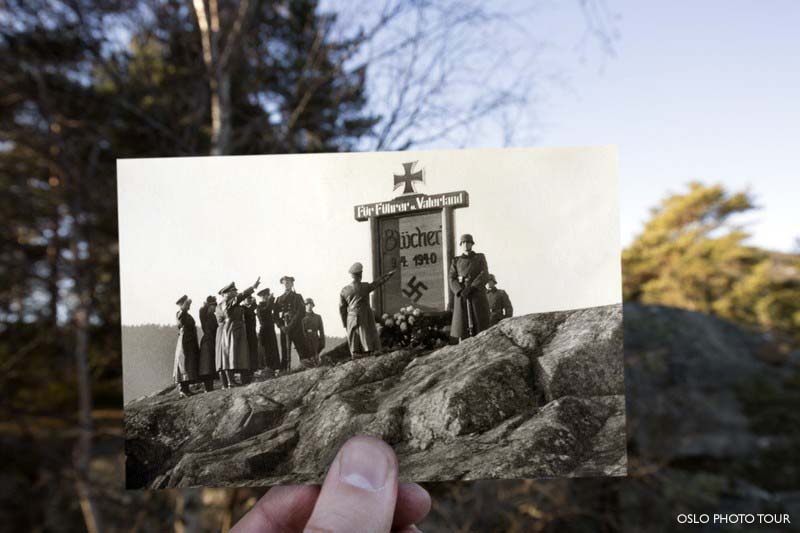 The fast invasion of Oslo was extremely important for the Germans but it was here where the greatest trouble was awaited them. The cannons of the Oscarsborg Fortress were fired against the German cruiser Blücher that sunk with the landing on board. In the photo, German officers salute the memorial of the deceased cruiser at Oscarsborg. 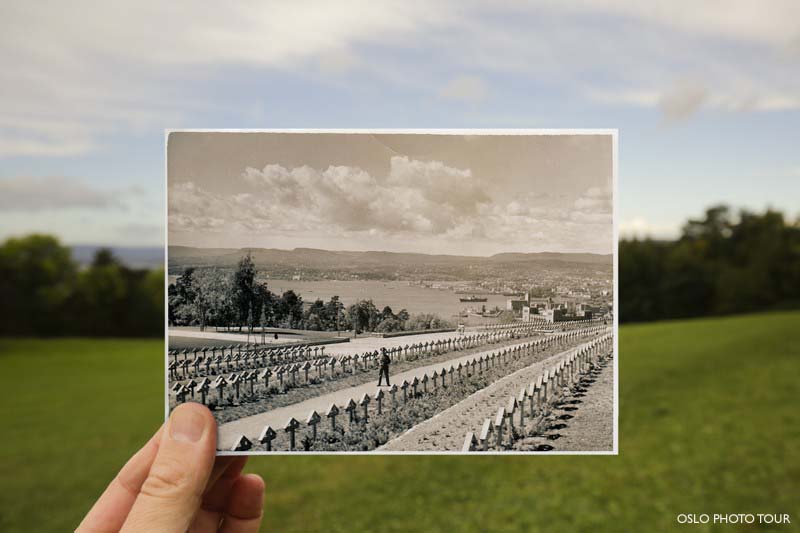 The Nazi honorary graveyard of Ekeberg was the largest cemetery in Norway. It was located on the Ekeberg hill in Oslo. In 1953 the graveyard was relocated to the outskirts of the city. 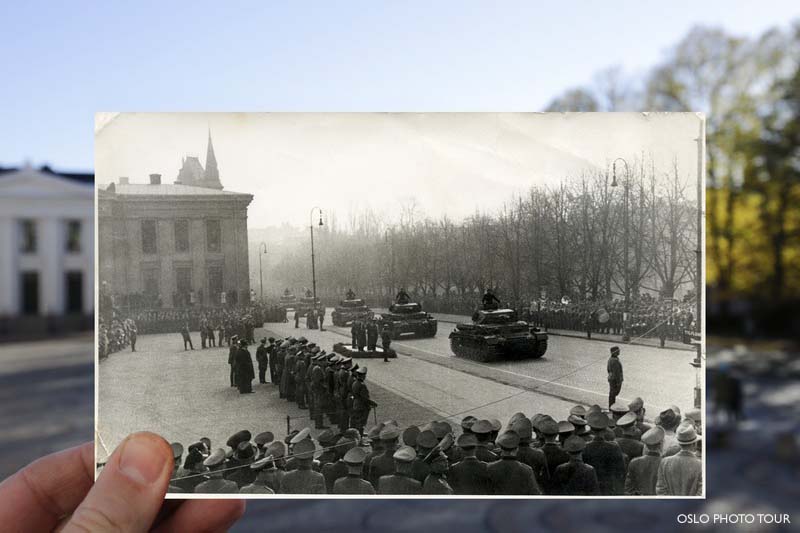 University square was often used for various events. In the photo, there is a parade dedicated to Hitler’s birthday on April 20th, 1942. Reichskommissar Terboven and Minister-President Quisling are standing on the podium, among others. 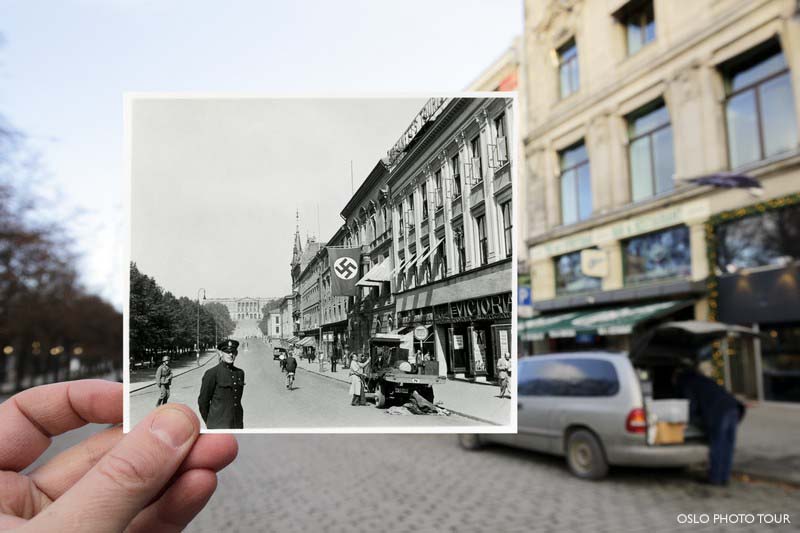 Only a large flag with swastika reminds of the war. The building with the flag was confiscated by the occupation authorities and used as an exclusive restaurant “Deutsches Haus” serving only officers.

Are you looking for souvenir or present?  The project was published in a brochure size A5, contains 22 unique non official /private pictures photographed by German soldiers.  Price 100 NOK + shipping.  For orders follow the link. 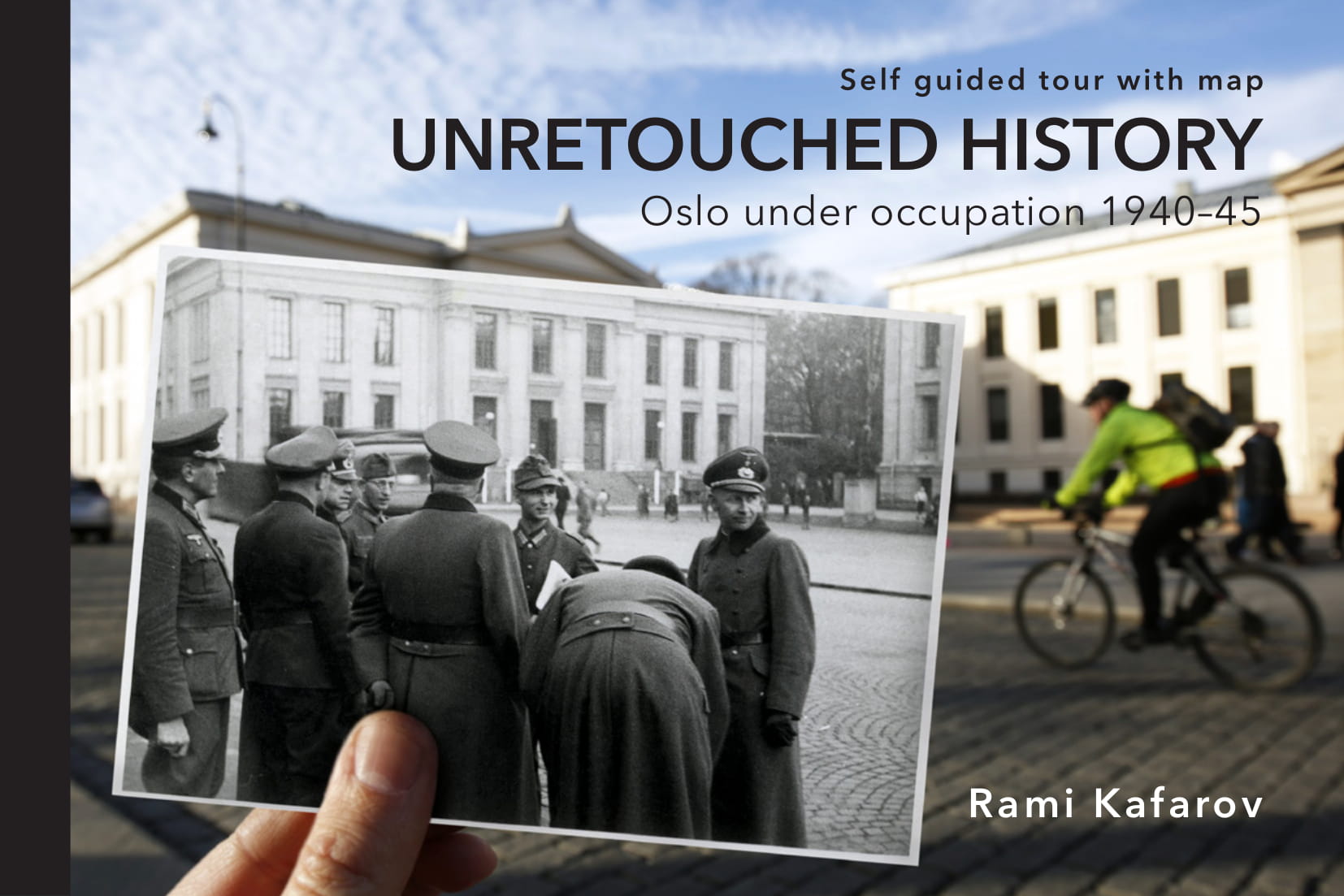 Planning to visit Oslo? You are welcome to  tour dedicated to the years of the German occupation of Oslo in 1940-45.